This section describes the conditional tracing capability in x64dbg.

When a trace step is hit, x64dbg will do the following things:

The log can be formatted by x64dbg to log the current state of the program. See formatting on how to format the log string. If you are looking for logging the address and disassembly of all instructions traced you can use {p:cip} {i:cip}. To redirect the log to a file use TraceSetLogFile, or via the graphical dialog. 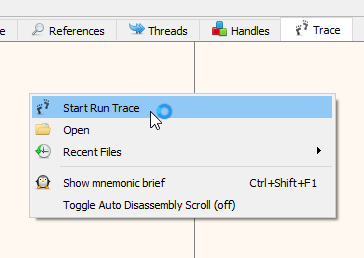 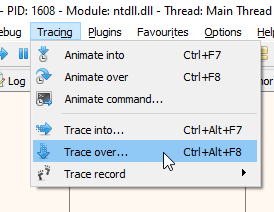 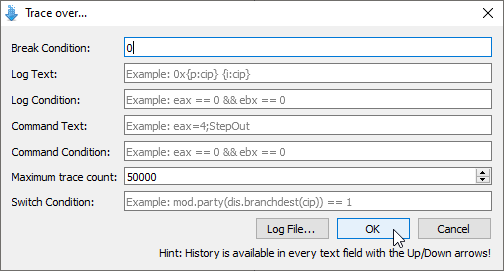 You should not use commands that can change the running state of the debuggee (such as run) inside the breakpoint command, because these commands are unstable when used here. You can use break condition, command condition or $tracecondition instead.

When you use Trace Over, the debuggee would not be paused inside the calls that has been stepped over, even if the condition is true. Also other operations, such as logging and trace record, are not executed. This makes tracing faster, but if these operations are desired you should use Trace Into.